The following summary of the fishery is
adapted from Larcombe et al (2016):

Banana Prawn (Penaeus merguiensis)
is mainly caught during the day on the eastern side of the Gulf of
Carpentaria, whereas Redleg Banana Prawn (F. indicus) is mainly
caught in Joseph Bonaparte Gulf (Figure
1).  Tiger Prawns (Penaeus
esculentus and P. semisulcatus) are primarily taken at night
(daytime trawling has been prohibited in some areas during the Tiger Prawn
season). Most catches come from the southern and western Gulf of Carpentaria,
and along the Arnhem Land coast. Tiger Prawn fishing grounds may be close to
those of Banana Prawns, but the highest catches come from areas near coastal
seagrass beds, the nursery habitat for Tiger Prawns. Endeavour Prawns (Metapenaeus
endeavouri and M. ensis) are mainly a byproduct, caught when
fishing for Tiger Prawns. 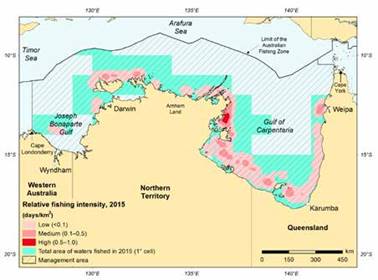 The NPF developed rapidly in the 1970s,
with effort peaking in 1981 at more than 40 000 fishing days and more than 250
vessels. During the next three decades, fishing effort and participation were
reduced to the current levels of around 7 500 days of effort and 52
vessels.  Total NPF catch in 2015 was 7
825 t, comprising 7 696 t of prawns and 129 t of byproduct species
(predominantly bugs, squid and scampi). Annual catches tend to be quite
variable from year to year because of natural variability in the Banana Prawn
component of the fishery.

Under an Offshore Constitutional Settlement
(OCS) agreement between the Commonwealth, Western Australia, Northern Territory
and Queensland governments, originally signed in 1988, prawn trawling in the
area of the NPF to low water mark, is the responsibility of the Commonwealth
through the Australian Fisheries Management Authority (AFMA).

The
fishery has been certified against the Marine Stewardship Council standard for
the main prawn species since 2012[1].

·
The NPF
has been certified against the Marine Stewardship Council’s Fishery Standard
for the main target prawn species since 2012.

·
Moreton
Bay Bugs are taken as a byproduct species in the NPF.  No formal assessment of the stock has been
undertaken, although quantitative estimates of acceptable biological catch
(ABC) have been developed using independent trawl survey data.  Catches in the last decade have remained well
below the ABC estimate.

·
There are
currently no well-defined HCRs in place for Moreton Bay Bugs in the NPF,
although the stock is subject to a minimum legal size and a precautionary trigger
catch limit of 100t which triggers a review of available data to identify any
sustainability issues if reached.

·
The
fishery is well placed against Component 2 and 3 PIs.

This assessment has been
undertaken in a limited timeframe based on publicly available
information.  Although all reasonable efforts have been made to ensure the
quality of the report, neither this company nor the assessment’ s authors
warrant that the information contained in this assessment is free from errors
or omissions.  To the maximum extent permitted by law, equity or statute,
neither this company nor the authors accept any form of liability, it
contractual, tortious or otherwise, for the contents of this report or for any
consequences arising from misuse or any reliance placed on it.

This report sets
out the results of an assessment against a seafood risk assessment procedure,
originally developed for Coles Supermarkets Australia by MRAG Asia
Pacific.  The aim of the procedure is to
allow for the rapid screening of uncertified source fisheries to identify major
sustainability problems, and to assist seafood buyers in procuring seafood from
fisheries that are relatively well-managed and have lower relative risk to the
aquatic environment. While it is based on elements from the GSSI benchmarked
MSC Standard version 2.0, the framework is not a duplicate of it nor a
substitute for it. The methodology used to apply the framework differs
substantially from an MSC Certification.
Consequently, any claim made about the rating of the fishery based on
this assessment should not make any reference to the MSC or any other third
party scheme.

This
report is a “live” document that will be reviewed and updated on an annual
basis.

Detailed methodology for the risk
assessment procedure is found in MRAG AP (2015). The following provides a brief
summary of the method as it relates to the information provided in this report.

Assessments are undertaken according to a
‘unit of assessment’ (UoA).  The UoA is a
combination of three main components: (i) the target species and stock; (ii)
the gear type used by the fishery; and (iii) the management system under which
the UoA operates.

Each UoA is assessed against three
components, consistent with the MSC principles:

Each component has a number of performance
indicators (PIs).  In turn, each PI has
associated criteria, scoring issues (SIs) and scoring guideposts (SGs).  For each UoA, each PI is assigned one of the
following scores, according to how well the fishery performs against the SGs:

For each UoA, an assessment of the future
‘outlook’ is provided against each component.
Assessments are essentially a qualitative judgement of the assessor
based on the likely future performance of the fishery against the relevant risk
assessment criteria over the short to medium term (0-3 years).  Assessments are based on the available
information for the UoA and take into account any known management changes.

Outlook scores are provided for information
only and do not influence current or future risk scoring.

Information to support scoring is obtained
from publicly available sources, unless otherwise specified. Scores will be
assigned on the basis of the objective evidence available to the assessor. A
brief justification is provided to accompany the score for each PI.

Assessors will gather publicly
available information as necessary to complete or update a PI. Information
sources may include information gathered from the internet, fishery management
agencies, scientific organisations or other sources.


Note: The NPF has been
certified against the Marine Stewardship Council standard for the main prawn
species since 2012.  The certification
covers the full geographic scope of the fishery.  Assessments against Components 2 and 3 of
this assessment are based on the information provided in the NPF’s MSC Public
Certification Report (MRAG Americas, 2012) and subsequent surveillance
audits.   Unless otherwise specified, the
Component 2 information is drawn from the assessment of the Tiger Prawn
sub-fishery assessment.